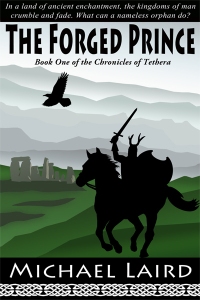 Llew’s quiet life was shattered when Queen Moriganna decided a common stable boy appeared to be precisely what she needed in her schemes against her rival, Lord Arawen of Annwyn, ruler of the land of the dead.

The ancient sorceress plans to forge a very special weapon, one intended to sunder dark prophecy itself and, in the process, make even the Lord of Death find reason for fear.

Yet these are the lands of Tethera, where nothing is ever quite as it seems.

For his own part, the boy named Llew intends to show the self-styled Queen of Deceit that even a weapon forged for evil can turn in its maker’s grasp and strike in an unexpected direction—most especially a weapon with a mind of its own.

Forced to venture forth through the wilds, to usurp a throne he does not desire, to save a kingdom he has never seen, Llew at once finds himself pursued by an ever-growing array of deadly enemies. Although he has gone forth to do the impossible, it now seems impossible he will live long enough to even try.

Fortunately, Llew is impossibly optimistic . . . and fairly handy with a sword.

This is the first book in the Chronicles of Tethera. It has been praised by readers as a very well written and gripping tale with compelling characters that each speak in their own voice, plenty of action and adventure, and all of it set in the deeply imagined world of a Prydein that never was.

Available now at Amazon.com in both Kindle and Paperback, and free to read for Kindle Unlimited and Prime.